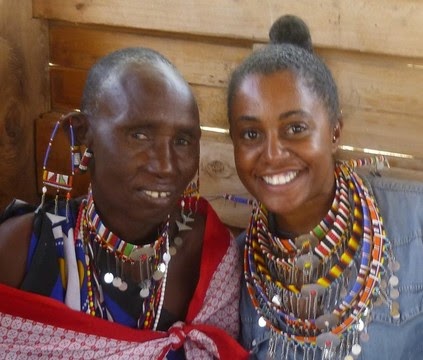 It took me a very long time to write this blog.  Way back in February, Miss Tereneh Mosely took time to come over and visit with me.  She is very busy right now, starting her own fashion line.  She isn’t starting just any fashion line.  She’s starting a fashion line with a collective of Masai women in Kenya, East Africa.

I’m still really thinking about everything she said.  I think that is what took me so long to write this blog.  But, I’ll share some of the notes my Mom helped me take from our visit. This blog is mostly in her own words.

“I had first gone to Kenya about 10 years ago. I had gone to a Masai village with a friend who had helped.  She was honored in a ritual.  The next morning some of the women were stretching out the hides. I asked to take a picture. They stopped and adjusted their clothes.  I wondered how to connect indigenous communities together. When I finished my teaching job in Asia, I used my last paycheck to go back and start this line.”

When Miss Mosely got to Kenya, she says “The Olorgesailie cab driver didn’t know where I was staying existed.  It’s near Tanzanian border.   Next to two extinct volcanoes.  Near a Smithsonian archeological dig which is part of human evolution site. It has the largest collection of stone tools.

I take morning hikes and I see these amazing pieces of stone. the whole ground is ash.  During the day, when you look up at the sky or down at the ground your eyes are burning because the ash reflects the light.   There are stone tools everywhere.  It seems that back then, people would make it, use it and throw it away. No one had a toolbox.  The people who made these tools didn’t didn’t seem to live there.”

Like the stone tools which seem to have been left for someone else to use, Ms Mosely takes about the women she is working with on her clothing line.

“They have an evolved sharing consciousness. They’ve taught me a lot.  For example when I talk to them about paying them for design.  Originally, there 24 women.  The number kept getting bigger.  So, I had to explain to them that we had agreed on one amount.  They responded, “WE would be more willing to get less individually than exclude anybody.”

According to Ms. Mosely, this attitude applies to everything.  “The last day I was there, I had food left over. I had rice, salt, sugar. I asked if it be okay if I brought it to the woman. They said yes. So, when I came the next day, instead of each person taking the bag, they would take a handful of rice. A tablespoon of honey.  A teaspoon of salt.  They shared everything.  Here, in the United States, someone would take the whole bag. There they shared everything. It was an amazing look at a functioning community. It’s why they survived so long.”

We talked about the way fashion designers are taking ideas away from African and Native American people.  I wasn’t sure what else to ask about using the Masai women’s ideas and culture.  What she said makes me realize that her line is about being respectful and sharing.

Of course we talked about ideas.  I think we are a lot alike.  She says, “I don’t get my ideas from fashion. I get them from nature, music, architecture, fine arts is a big influence. The idea of what that person’s life would be like wearing outfit. I think about where they’d wear it why how.  Theres something about how we dress about how we communicate our idea of self to the world.  For the evening gown for the first Masai collection, I’m thinking about someone going into the Oscars or a state dinner at the White House looking beautiful and like themselves and like no one else.”

I think being in Kenya and near that archeological dig is having an influence on her. “They way that I start of is I try to make it as small as possible.   I’m envisioning two nomads, one suitcase. I think we can use less stuff, not more stuff.  I started with an idea of having men, women and unisex stuff.  That people could share their wardrobes.  We have a day dress that you would wear to the office.  We have an evening gown.  Both are inspired by the Masai women’s way of draping the kanga...the wrap. We have a white shirt and black suit that are unisex that are based on the draping of the men’s shuka...the men’s fabric draping.  The suit jacket is going to have some hidden beading.  It’s Chanel inspired.”

It sounds very exciting.   I can’t wait.  Now, you can see why I’ve been thinking and thinking about our time together.  She is very nice.  I am lucky to know her.

Lesson Learned: I am lucky to know amazing people.
Posted by Windafire at 4:02 PM

Windafire
I am eleven years old. This is what I think.